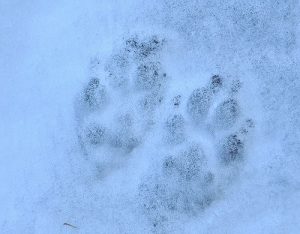 Tracks in the snow tell a fascinating tale of winter wildlife, a glimpse at the lives of creatures we rarely get to see.

Winter’s the time to see where the deer are wandering, to get an idea of how many rabbits there are in the woods,  or to spot the hollow trees where a mouse or a squirrel is making its home.

The best time to see tracks is just after a moderate snowfall. When the snow is fresh, the tracks will be clean and crisp, with well defined edges that make it easy to see the details.

Deer tracks are the easiest of all to identify, because there’s nothing else like them. Moose have a very similar track shape, but the difference in size is unmistakable.

Understanding what you’re looking at isn’t always as easy as that, though. And there are a handful of sights that can make even the experts scratch their heads.

Perhaps the biggest challenge has to do with identifying canine tracks. Wolves, coyotes, foxes and domestic dogs all have a very similar paw shape, with a single rear pad and four toes. Knowing who walked through your yard takes a bit of extra detective work.

For starters, ensure that you’re looking at a canine track, not a feline or a member of the weasel family. The odds of seeing lynx tracks in Muskoka are fairly low, and the chance of seeing cougar tracks is even lower, but to be sure, just look for claw marks at the ends of each toe. Cats retract their claws when they walk, so they leave no claw marks; canines can’t retract their claws, so they usually show in the track.

Fishers, pine martens and mink are all members of the weasel family. The telltale sign for them is that they all have five toes.

Does the track you’re looking at have four toes with visible claws? Then it’s some kind of canine. But which one? That’s where it gets tricky.

Track size can certainly help tell the different dogs apart. True wolf tracks are big – each track is four or five inches long and nearly as wide. Coyote tracks, on the other hand, are only two and a half to three and a half inches in size, while foxes are two to three inches.

But there are domestic dogs of all sizes, including some with feet easily as big as a wolf’s. And in snow – particularly deep snow – tracks can be much larger than they would be in mud or sand, as the fur around the animal’s foot compacts more snow.

To really be sure whose trail you’re on, you need to look at more than just the individual footprint. Step back and take a closer look at the overall pattern, and think about the behaviour of the animal. Domestic dogs are usually carefree when they’re outdoors. They’re excited, playful and curious, rushing back and forth and smelling everything. They have no need to conserve their energy, because they know exactly where their next meal is coming from.

Wild dogs, on the other hand, are all business: they’ve got somewhere to go and a reason to be there. Their tracks are almost always in a straight line, with no deviation or back and forth.

They also tend to have a narrower trail than dogs. If you were to draw a line down the centre of their trail, you’d find that the left feet and right feet of a wolf, fox or coyote land much closer to the centre line than your pet dog’s do. Wild dogs are also more likely to “direct register,” which means they place the hind leg in the same spot as the front leg, leaving something that looks at first glance like a single print.

Of course every rule has its exceptions, and even experts will disagree over which animal left a particular set of prints. But spend enough time outdoors, looking closely at the tracks you see, and you can start to get a picture of the amount of activity that takes place when we’re not out there.

Posted in Blog, Connecting with Nature.