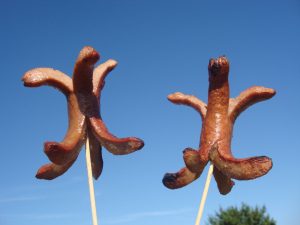 A Family Day cookout is a tradition for many of us. And while there’s nothing wrong with hotdogs and s’mores, why not take your campfire cooking to the next level? Sweet onions roasted in the embers, spider dogs for the kids, and even a smoked whiskey cocktail for you.

Most on-the-fire cooking takes little preparation or equipment. Just some creativity, a willingness to experiment, and perhaps a bit of patience.

It also needs a fire, of course. Hardwood is best if you’re cooking, and it needs to have been burning for a while so that there’s a good supply of hot ashes and embers.

The onions take the longest to cook, so start with them. Scrape some ash and ember away from the main part of the fire, six or eight inches should be good – you want it to be hot, but not so close that the flames or red hot coals touch the food. Take some large, unpeeled onions, and place them on the ash. After about twenty minutes, turn them so that the other side cooks. Check them after another twenty minutes and see if they feel done. Then just scoop them up, towel them off, and peel and discard the charred outer layers to reveal the sweet, smoky interior.

If you want to cook the onions a little faster, you can shovel some ash on top of them, then put red hot coals on top of the ash. The risk of this method is that you can actually lose the food in the ash, particularly if the onions are a little on the small side!

You can cook many other vegetables the same way, including potatoes, sweet potatoes and squash – anything that’s got a tough outer skin that can be discarded.

While the onions are cooking, it’s time to make some spiders. These are simplicity itself, but kids love them.  All it takes is two lengthwise cuts in each end of a hot dog, to create four “legs” at either end and a solid “body” in the middle. Pierce the dog with a fork or stick as you normally would for roasting, and cook it over the fire. As it cooks, the “legs” will curl up, making something that looks remarkably like a spider on a stick. You can also cut longer legs at one end only, leaving the other end uncut – now you’ve made a hot dog octopus.

You can also do this trick indoors – hot dogs will curl into spiders and octopi in boiling water – or on the barbecue.

While the kids are cooking their dogs and you’re waiting for the onions, it’s time to channel your hipster bartender. Smoked drinks are all the rage, and you can even buy mini smokers for use indoors. But if you’ve got a fire, you’ve got smoke already. You just need to capture it.

All it takes is an empty glass jar with a lid – a mason jar is perfect. Hold it over a smoky part of the fire, and watch it fill with smoke. Take it out, put the lid on, and turn it over. Remove the lid, pour in a splash of whiskey, and quickly replace the lid to keep the smoke in. Swirl the jar for twenty seconds or so, and you’re done – pour the whiskey over some ice, if you like, or make an old-fashioned, and enjoy.

If you want to take this to the next level, try experimenting with different woods. Put an apple, cherry, maple or oak branch in the fire to get it burning, leaving one end out so it stays cool. Then pull the branch out and capture the smoke from the burning end in your jar.

You can also try different alcohols as well – smoked vodka martini anyone?

Posted in Thoughts on Food.